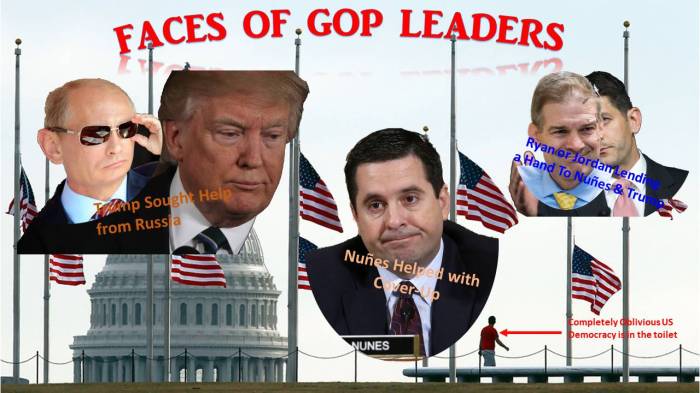 The whole country, I mean the freakin’ whole country – Democrats, Republicans, Independents, Blacks, Whites, Browns, Gay, Lesbians, Young, Old, Educated, Illiterate, public Officials, Civilians, Military Personnel – is outraged that Jussie Smollett was not thrown in jail for staging an act which caused physical harm to himself but the whole Republican machine is out in full force claiming Donald Trump has been cleared of wrongdoing in the Russia’s investigation. Am I still on earth?

Can someone get me a glass of … anything? Please!

Donald Trump MUST be Impeached To Save the Republic!

Not To Impeach Trump Is Unpatriotic, Unconstitutional even.

USA is for Sale, the White House has been on Sale for at least two years.

America Is Now Officially Among the MOST Corrupt Governments in the World.

Remark: Although it may still be impossible to prove beyond reasonable doubt Donald Trump colluded with Russia, it is blatantly obvious he and his associates have had a great deal of collaboration with foreign entities (States & Individuals). One aspect of Trump’s life is easy to verify: Mr. Trump has never done anything legally and legitimately in his private life. SDNY will show that to the world at the appropriate time.

One thought on “Not To Impeach Trump Is Unpatriotic”