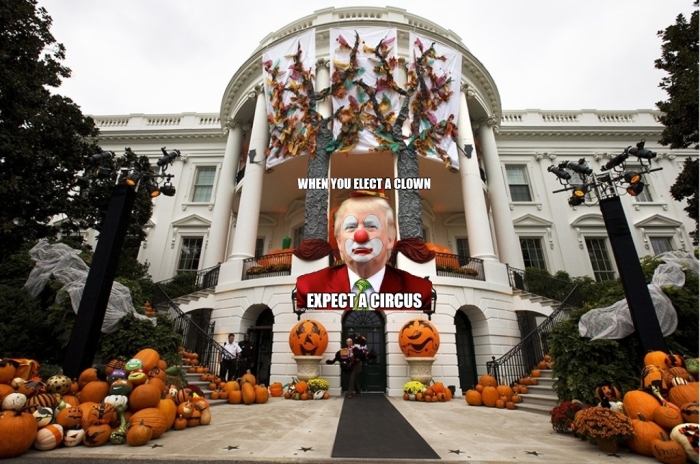 It is well documented – with wide flexibility of tolerance margin – that the Trump administration is UNABLE or UNWILLING to say anything which is true. To believe or to hope otherwise is a sure sign of a serious case of delusion.

With Halloween fast approaching, across America children are getting ready to knock at doors for a trick or a treat, adults are shopping for the scariest costumes. The country however has been in a state of Halloween since January 20 of the year 2017. It has been thus far the scariest ride the country has ever had, with residents of the White House wearing their spookiest costumes every day, scaring the hell out of America. It is a hell of a Halloween for everyone this year! Even animals are running in a frenzy to hide from the spooky characters in the White House.

Enter the 45th occupant of the Oval Office!

Donald Trump, Clown Headmaster, has transformed the Oval Office into a Horror Shop of Clowns. Every day, the lead clown Sarah Huckabee-Sanders puts on a clown show for an audience which acts much like children, except on a few occasions when one would challenge the lead clown to give a treat instead of a trick. Since Sarah has assumed the post of White House Press Secretary, she has gone unchallenged most the time by the Press Corpse (not a typo) which has failed to do the job. Because most WH Press correspondents are more concerned about securing their seats in the White House than to expose the little horror shop in the daily clowning by Sarah Huckabee Sanders, they too contribute to the spooky environment.

No longer is the United States regarded as the leader in the world stage; the White House is now compared to a Clown Shop across the world. What can be scarier? And the Clown Headmaster Donald Trump wants to make certain it stays that way.

A few weeks ago, the Secretary of State Rex Tillerson was “forced” to hold a clown show (I mean a press conference) to make a retraction about his comment that Donald Trump is a moron. Although the clown show was held, Mr. Tillerson never mentioned once during the show he retracted his comment. Questioned several times in many ways by different reporters, the show ended without an actual retraction. On the contrary, Mr. Tillerson confirmed and made it quite clear he meant what he said. I’m not a politician, he said; I didn’t come to Washington to attend to those petty issues. Translation: I called Trump a moron – he is – and that’s that.

Last week, just a day after a reporter asked the president question related to the four green berets killed in Niger, Mr. Trump who had kept silent both publicly and without reaching to the families of the fallen soldiers, immediately placed called to those families. But instead of offering moral support, he told the widow of one of the soldiers “he knew what he signed up for”.

What a jerk of a president! What a scum bag of a human being! What a moron!

And he wasn’t done spooking the country.

He delegated another scary character, John Kelly the White House Chief of Staff to do some more clowning around. Previously considered one of the few “untainted” characters, Mr. Kelly not only put a clown show never before seen but he also revealed to us all that he was wearing a mask like the others; he removed it to give us a peek just in time for the Halloween. Mr. Kelly did not just defend Donald Trump for his outrageous comments to the families of the fallen soldiers, he also went out of his way to smear the Congresswoman Frederica Wilson by lying, a lie which was immediately debunked by many news networks. In his clown show, Mr. Kelly made it clear that he too belongs spirit and soul to the Horror Shop led by Clown Headmaster Donald Trump.

That latest development is one grim reminder that Halloween is one long 4-year of spooky characters. The Clown Show has just begun.

The 2-minute audio from The OBAMA Legacy audiobook – available on Soundcloud, Audible, Amazon and Apple for just $6.95 ’til January 2, 2018 – provides a factual account of his presidency. Take a listen.