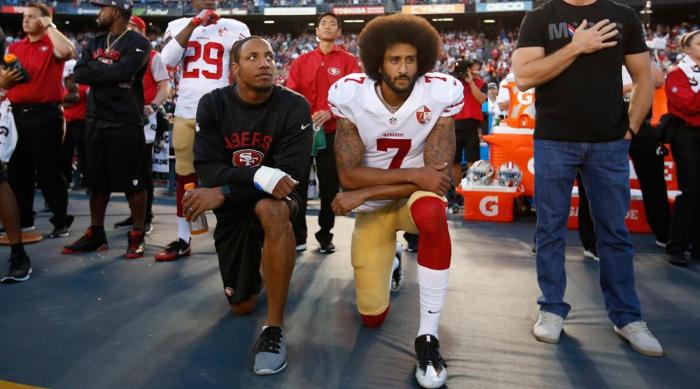 Call it whatever else you want! It is nevertheless another milestone of Blacks’ struggle in America

Colin Kaepernick is a black man who is tired of the discriminated practice by law enforcement officers and the justice system towards blacks. But Colin is also “a well-known NFL quarterback who was quietly and peacefully protesting the oppression of minorities in this country by sitting — and then kneeling — during the National Anthem”. Kaepernick did this because he wanted to make waves that ultimately spark a conversation and hopefully then change (Dieter Kurtenbach, Foxsports.com, Sep 9, 2016).

All hell broke loose; white supremacists, racists and ignorants of the United States Constitution led by their favorite mouthpiece Fox Opinion – known and referred to by most as Fox News – have come out to condemn the protests. These reactions are standard at Fox; each time Blacks organize to protest against injustice, police brutality, discrimination, it is a sure bet that hosts at Fox will find plenty of material to discredit the protests, the organizers or both.

It seems that no one at Fox is smart enough to understand that protests against government wrongdoing represent the fabric of democracy; everyone – that’s including Blacks – has the right to exercise the freedom of expression. Protests are tools to do exactly that.

Mr. Kaepernick has the right to protest against police brutality and murder of Blacks, especially considering that most of those police officers – which I have labeled criminals with badges – are very rarely held accountable. Law enforcement officers’ behavior are reminiscent of the 1960’s when any white individual could wrong any black without any fear of punishment.

Fox Opinion was the first to beat the drum that the election of Barack Obama marked the end of discrimination in America. That was the most unfunny joke when you consider that during the historic event of Obama’s inauguration – the first black president in the country – Fox chose NOT TO air the inauguration but instead provided live feed of George W. Bush leaving the White House.

Yes, discrimination is rampant in America and Fox plays the leading role to help perpetuate the practice; anyone who would like to help end prejudice and discrimination should join Kaepernick to effect the much needed changes in the country vis-à-vis race relations. It’s a revolution which has already begun. You can either join in or get out of the way. Regardless, the Kaepernick revolution continues.