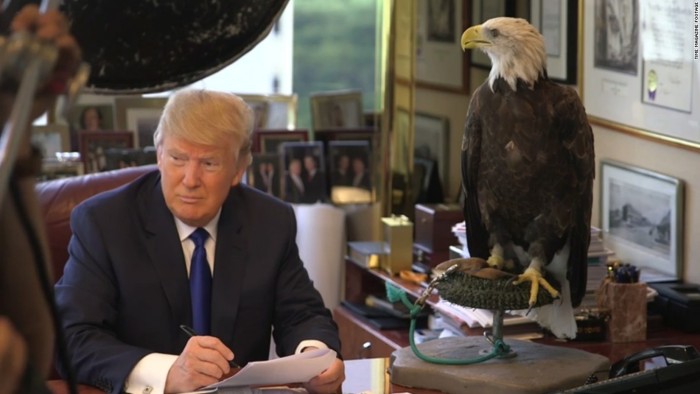 Disclaimer: I am not related to any political campaign and/or party in any way, shape or form;  I am not associated with any Super Pac I am not in contact with the candidates, their campaigns or their Super Pacs. I am not a supporter of any political party or candidate. This article is to help you filter through the noise produced by the chatters in the media.

What Would It Cost You To Elect Trump For President?

Mr. Trump proposes to do the following on his first 100-days in the Oval Office:

With such a busy agenda to lift the country up, it’s understandable that millions of Americans would like him as the next president. But because Mr. Trump’s campaign is tight lipped on what it would cost to implement such an ambitious agenda, we went behind the scenes to investigate the genius of his plan. Without further ado, let’s take you through the road to the White House.

You got your wish, Donald Trump managed to collect enough delegates (1,237); he became the nominee of the Republican Party. No one could deny him that; he ran a great campaign; he knocked everyone out of his way; he insulted the crap out of everyone who opposed him or threatened his nomination; he encouraged his supporters to insult protesters and punch them out of his rallies. He finally did it, Mr. Trump became the nominee. And that was just the beginning.

Finally, the time had come. The day you were waiting for, the day you were fighting for, the faithful first Tuesday in November, the voting day for the general elections arrived. You couldn’t even sleep the night before. Early, very early you got up, excited; you may have even forgotten to take a shower. You began to sip your coffee, kept watching the clock; you couldn’t wait for the polls to open; you were impatient, anxious. You were ready to cast your vote for Donald Trump; you were absolutely sure he was the best choice for the country.

When the timer went off, you knew it was time to head to the polls; you got in your car, an old beat-up Chevy Malibu which very rarely started when you turned the ignition key but for some unexplainable reason it started that morning on the first try. You knew right away you were making the right decision. You happily drove to the polling station, parked the car and joyfully entered the premises. You disappeared inside a voting booth, pulling the black curtain behind you. One minute later, you pulled back the curtain and gleefully yelled, your fist up “Trump, the next president!” Most everyone at the polling stations were startled; you didn’t care. You couldn’t care. After all, you are a Trump’s supporter; he doesn’t care what others think or feel. Besides, you were much too happy to appreciate anyone’s reaction. You went back home waiting for what could become a dream come true for you, the happiest day of your life. You spent the rest of the day on the phone talking to friends, acquaintances, colleagues, family members while TVs in all the rooms were tuned in to various news stations – you didn’t want to miss a beat – giving a minute by minute commentary of what would be expected when the last polling stations were closed. It was both an exciting and nail biting experience. You’ve never felt that way before. Not even your wedding felt that good!

When the announcement came that the last polling stations in the West Coast were closing in less than 30 minutes, your eyes were already heavy, your body was exhausted, you were tired. You didn’t even get to eat that day; food was the last thing on your mind. But before you passed out on the couch, you breathed a sigh of relief; you crossed your fingers, closed your eyes very tight and prayed that Donald Trump won the general elections. And you were completely out; your body had enough excitement for the day.

But the next day when you woke up, you also woke the neighborhood yelling non-stop “Yes, yes, yes, yes, yes, Trump is president!” and repeating it over and over and over. Your excitement was only put on hold because the doorbell rang. Two police officers were dispatched – neighbors called the station to complain about non-stop yelling next door – to find out what was going on at three o’clock in the morning (3:00AM). When the officers asked what was going on, your answer seemed “rehearsally trumpistic”:

So, you cooled it down; you made yourself a pot of coffee you sipped down so fast you had to make another pot less than an hour later. You looked at the time, darn it! It was only 4:00AM. You couldn’t wait to call everyone and express your joy at the news that Trump will occupy the Oval Office in January 2017.

January 2017 came, Trump is sworn in; the frenzy was now over; no more rally, no more insulting of protesters, no more punching Trump’s dissenters, no more yelling, no more excitement. It’s now real. Your candidate won. Donald J Trump is now the president of the United States, what financial impact will his presidency have on your pocketbook?

In the next few paragraphs, we will discuss with you the financial impact Trump’s presidency will have on you. Keep in mind that our discussions are based exclusively on the following premise:

** President Donald Trump makes good on the promises he made during the campaign AND both Houses go along with his tax plan.

Otherwise, just like all candidates before Trump, you may be screwed. Campaign promises are most of the time just that, promises. And Trump was careful to hide those details from you; you might have not voted for him, right?

Let’s start with the slogan then candidate Trump used over and over in order to reach the Oval Office:

For the discussions, we rely completely on Trump’s plan for America; in other words, we avoid talking to “experts” about what the plan may mean for the country. Put differently, we do not translate, interpret or rephrase Trump’s statement. So, everything we analyze here can be found on his official website http://donaljdtrump.com in a much lengthier version. Let’s get to it.

For starter, if you’re out of a job, you’re out of luck. Nowhere on the website is it mentioned once how Mr. Trump will create jobs for those who are unemployed and the hundreds of thousands of students who will graduate in the next couple of semesters before the elections are over. To be fair, Mr. Trump believes that his tax plan – which we will discuss shortly – is so attractive it will bring businesses back in the country and voila that will create so many jobs for everyone who wants a job. I wonder why nobody ever thought of that before. It’s so simple, even a caveman could conceive it. Moving on!

If you believe those who swear on their parents’ graves they saw Bigfoot, it’s not at all difficult to believe the utopia that businesses will be flocking back into the country because of tax windfall President Trump would offer. In addition to the obvious flaws in the argument that a low tax will bring businesses back in droves in the country – there are many factors (one of which, probably the most important one, is wages) – which contribute in the decision to move a company to another country or even to another state. It is never a simple one; therefore, although a low tax is without doubt attractive, it will not be the only factor businesses consider before making such drastic changes. Besides, there are currently nine STATES (Alaska (AK), Florida (FL), Nevada (NV), New Hampshire (NH), South Dakota (SD), Tennessee (TN), Texas (TX), Washington (WA), Wyoming (WY)) in the country with no income tax; if low (or no) income tax was the only issue, most (if not all) companies would simply move to any of those states. (Note: watch for an upcoming documentary on a comprehensive analysis of corporate taxes in the US, why companies choose to leave the country)

As I pointed out earlier and it’s worth repeating here again, if you’re out of a job, you’re out of luck under the Trump’s administration. But, if you have a job, you’re in luck; at least, that’s what Mr. Trump wants you to believe. Let’s look at what he has in store for you. Without indulging you by repeating “all the beautiful things Trump is going to do for you”, his tax plan is just 4-pages (8 ½ x 11) long and contain lines after lines of “beautiful words which will make the country great”. Although one would be hard pressed to implement any of the ideas in the plan – there are no specifics, as long as you make it beautiful – Trump provides the following tax table below:

Scenario 2: Next, let’s look at what most households would pay under the Trump’s tax plan. According to the 2014 Census Bureau report, the median household income in 2014 was $51,939, approximately $52,000. Based on that figure, most individuals (Single Filers) would fall under the third row while both married individuals (Married Filers) and single parents (Heads of Household) would fall under the second row in the Trump Tax table.

You don’t have to be a mathematician or an accountant to realize that Trump’s tax plan is not going to spew money into your front porch but to be fair, it needs to be compared with the current IRS table produced below: 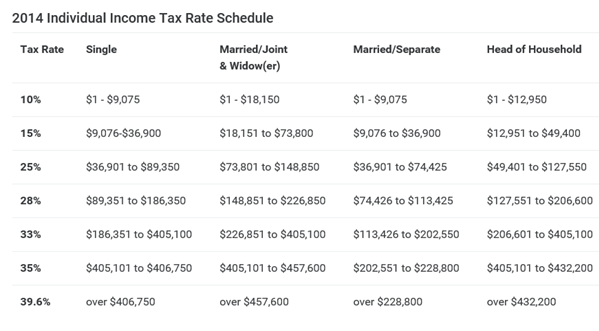 If we used the same scenarios as earlier, here is how taxpayers fare under the current IRS system. IRS does not currently have any scenario under which taxpayers pay nothing; under the Trump’s tax plan, “you win” as Trump would gleefully put it.

While you may be excited over the prospect of a Trump’s presidency, your pocketbook may not be so happy if Trump were to become president. Yes, he may be able to “Make America Great Again” but what’s certain is your financial situation may not allow you to enjoy the newly Great America; it might even get worst for your checking account. Donald Trump relies a great deal on your ignorance (of those details) to propel him to the top of the Republican ticket, and you have done your utmost best to make it happen. It is time to demand Mr. Trump to provide specific details how he’s going to Make America Great Again. It’s nice to hear he’s going to do that; it’s nice to hear he has a plan to make it happen but it seems that nobody knows what that plan is. So, before you cast your next most important vote for Trump, do yourself a favor, do your kids a favor, ask Trump for details on his tax plan, on his healthcare plan, on his plan for the security of the country.

Slogans will not put money into your bank account; slogans will not cure you if you’re sick or pay your hospital bill; slogans cannot protect the country. Slogans work well for businesses. To run a country requires planning, serious planning. Let’s make America Great Again by asking Donald Trump for specifics. His tax plan doesn’t even pass a superficial scrutiny.

It may cost you too much not to ask!

2 thoughts on “How Much Would President Trump Cost You?”