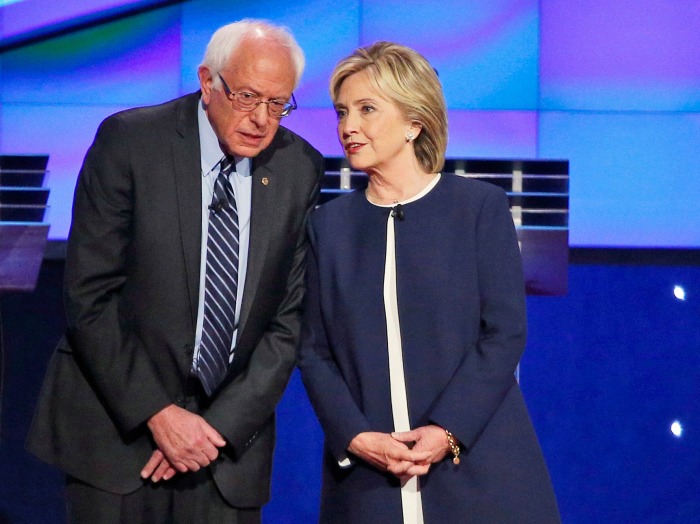 Disclaimer: I am not related to any political campaign and/or party in any way, shape or form;  I am not associated with any Super Pac I am not in contact with the candidates, their campaigns or their Super Pacs. Oh, I am not a supporter of any political party or candidate either. This article is simply an attempt to provide objective opinion about the candidates/issues to help you filter through the noise produced by the chatters in the media.

This is part 2 of a two-part series on why Hillary must pick Bernie if she wishes to be in the Oval Office as the next president of the United States.

If Hillary Clinton is serious about winning the general elections, she should seriously consider choosing Bernie Sanders as her running mate. The path to victory for Mrs. Clinton is narrow, steep and filled with uncertainty. Bernie in the ticket will help clear and enlarge the path to the White House. Although the ongoing challenge has its benefits, it certainly helps both Bernie and Hillary hone in their skills for the general elections in preparation for a nasty fight with the Republican nominee (be it Donald or Ted), a prolong fight between the two Democrat candidates does not only shorten the recovery time before the general elections but it also provides ammunition to the eventual Republican contender. So, to avoid further bruises and burns, Hillary and Bernie should work out the details of the ticket before they discover they have irreconcilable differences. (Read about their marriage here)

Any political strategist or analyst should be able to come to the conclusion that to beat Hillary Clinton in the general elections is not an easy feat at all; it may even require an act of God. Not really! Not anymore! There lies the reason behind the permanent campaign against her since she resigned the post of secretary of state at the end of Obama’s first term presidency. There is no need to rehash here the strength of her credentials; in a two-part article, the first of which was published in January 2016 (do read part 2 as well), I provided great deal of details about Hillary’s political career, experience and success, as well as some of her failures.

Despite her success, and probably because of it, Mrs. Clinton has made a series of mis-calculations in the beginning of her 2016 campaign. At first, she completely dismissed Bernie Sanders as a serious challenger for the nomination. Ironically, she made the same mistake in the 2008 presidential elections cycle against then Junior Senator Barack Obama. She’s never learned, has she? But the most problematic aspect of her campaign is the unexplained, the assumed, the implied and the contagious hatred displayed towards her. Why do so many hate Mrs. Clinton so much? Why is she perceived as dishonest? (She is not any more dishonest than most politicians) Why are Republicans so afraid of a Hillary’s presidency?  – Read All You Need Is Hate in the New York Times to get a grasp of the hatred towards Mrs. Clinton; if you’d like to find out when and how it all started, read Among The Hillary Haters in The Atlantic. Read why the GOP Leaders are so afraid of a Hillary nomination for some insights on a Hillary’s presidency.

As a politician, it is expected she’d have opponents, dissenters, enemies even but what’s perplexing is the easiness for labels to be placed on her and stick. For instance, after the attack on the Embassy in Benghazi, Libya, the Republican machine aided by Fox Opinion (referred to by most as Fox News) has made it a business venture to find something, anything which would incriminate Mrs. Clinton to be directly responsible for the tragedy. Having failed to do so, Republican members of the “Investigation Committee” (main task is to find out what went wrong and advise on course of action to avoid future such tragedies) in Washington have spread the rumors that she had lied about what had happened in the Benghazi attack. To shore up the stories that she had lied, they gradually leaked to the press partial details which would lead one to conclude she did indeed lie although anyone with half-a-brain should be able to see through the dirty tricks of the Republicans.

Don’t believe me? Take a stroll into Bill Clinton’s presidency to get a grasp how the Republicans operate vis-à-vis the Democrats in general, the Clintons in particular. They pursued Bill Clinton relentlessly for a matter (Monica Lewinsky affair) which has no political implications and tarnished an otherwise perfect record of a very successful president; they impeached Bill Clinton. Put nicely, one doesn’t have to be a genius to figure out that the Republicans have nothing on Hillary in regards to Benghazi but they have managed to “slap the liar” label on her and it sticks. Among the Sanders’ supporters for instance, over 90% believe that Mrs. Clinton had lied; if you inquire why they think so, you get the same list recited by the Republicans but not a single Sanders’ supporter is able to articulate what exactly Hillary had lied about. Such belief among a group Hillary sorely needs to win the general elections is a major deficit for her campaign. Coincidentally, she would need a major turnout in order to win the general elections. And Bernie can help.

Although it is common belief that once the primaries are over, supporters of one’s challenger would naturally rally behind the nominee, it is very doubtful however that Mrs. Clinton will be able to bring all Bernie’s supporters to her campaign which is why we believe Hillary ought to pick Bernie Sanders as her running mate if she really wants to win in the general elections. The strategy will help kill two birds with one stone 1) it is probably the only sure way to guarantee Bernie’s army of supporters doesn’t desert the party 2) she will be able to win the general elections with ease, quite possibly in a landslide.

In addition to having a catchy slogan such as TheHillBerns (or HillaryBerns), the Hillary-Bernie ticket will be unbeatable irrespective of the Republican ticket. I already said that, didn’t I? We’ve already established Mrs. Clinton’s credentials which are unmatched by any of the candidates seeking the office of the presidency but we also discussed her vulnerabilities in the general elections. We fail to comprehend the origin of the deep seated hatred towards her. But we do acknowledge that Bernie in the ticket will strengthen the Democrat camp and guarantee a win in the general elections. No matter what the Clinton’s campaign does at this point, there is just not enough time to repair the negative perception they have of her. Like Bernie’s supporters, it’s time Hillary “feels the Bern”.

Although Bernie comes with a problem he created – he called himself a democratic socialist, a label which is also used by anyone who wants to deny him legitimacy in American politics but Bernie is no socialist – his message is popular among a very large sector of the population, the young. They also believe he is honest. If he is in the ticket, his movement (or revolution as he calls it) will continue to be supported by a very energized electorate who is able to mobilize an army of volunteers at any moment notice. Bernie Sanders will not just bring the army of young voters who support him to the party but he will also chip into the Republicans’ young voters’ group. Per several surveys conducted during the primaries, there seems to be an overlap between the young group in the Sanders’ camp and the one in the Trump’s camp. Both are attracted to the populist message to changing Washington, getting rid of lobbyists and giving something back to the constituents. In the Sanders’ camp, it is Universal Healthcare, free college education and a voice in the government; in the Trump’s camp, it is stopping the flow of illegal immigrants, dealing with China’s unfairness and punishing companies which move jobs out of the country. In essence, both messages resonate with the constituents which have been “screwed” over and over by seasoned politicians who have completely ignored them once elected in office. Hillary typifies “seasoned politicians”.

As it should be obvious to Mrs. Clinton by now, the opponent she ignored and dismissed – remember, he is called a socialist and doesn’t even deny it. There is no place for socialism in America but Bernie’s supporters do not care – has created a movement that is far greater, far stronger and far better than any political attack ad can defeat. Just to have Bernie’s endorsement would not do the trick; sure, his support for Hillary will help a little bit but that may not be enough to guarantee her a win in the November general elections.

The Bernie’ supporters are not for sale or for exchange; they are loyal to the Bernie’s message. And if Mrs. Clinton made the mistake of dismissing Bernie again, there will be no opportunity to recover this time. That mistake will be a fatal blow to her aspirations for the Oval Office.

From the very beginning, Bernie set out to change the political landscape and he has. Bernie vows to his supporters that their voices will be carried all the way to Washington; translation, Bernie will fight to be the nominee. If he fails, his supporters may sow revenge on Hillary by voting against her in the general elections. Mrs. Clinton would be naïve to think she can inherit (or rally) Bernie’s supporters with just his endorsement. Bernie has become an indispensable partner Hillary can no longer ignore or dismiss. She needs Bernie in the ticket. As it is so beautifully said in the Bible, Matthew 21:42 “Jesus said to them, Have you not read in the Scriptures: ‘The stone the builders rejected has become the cornerstone…” Bernie Sanders has indeed become the cornerstone of the Democrat Party without whom the aspirations for the Oval Office in 2016 may remain just a dream, for Hillary and the Democrat Party.

If Hillary Clinton is serious about winning the general elections, she should choose Bernie Sanders as her running mate.

One thought on “Hillary-Bernie The Unbeatable Democrat Ticket”