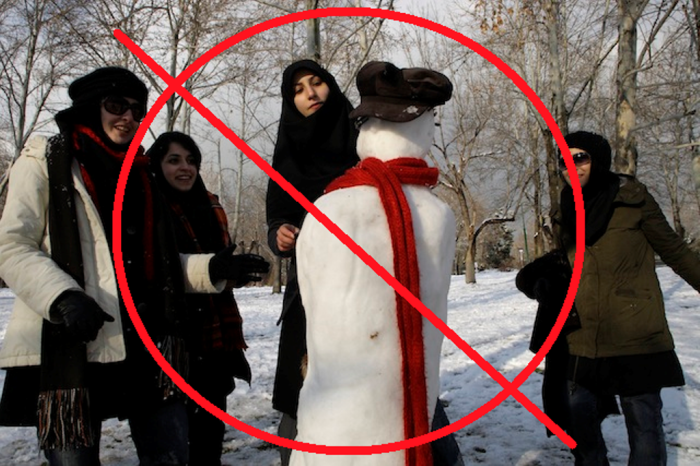 Ban All Muslims From Entering the U.S.

I am not at all bothered by any of the outrageous statements Donald Trump has made but I am deeply concerned that his sentiment is unfortunately shared by millions of Americans.

I am completely flabbergasted that Republican leaders and presidential candidates are outraged over Donald Trump’s statement regarding banning Muslims from entering the United States. This is completely disingenuous on the part of any Republican Representative who chides Trump. This is not to say it’s okay because the Republican Party shares Trump’s ideology but I am confused.

Those infamous words may be attributed to Donald Trump’s brash, outlandish personality and unrepentant position but Mr. Trump is not who you think he is; Donald is unequivocally the spokeperson for the Republican Party. The outrage expressed by Republican leaders, speaker Ryan and Reince Priebus chairman of the Party for instance, and the Republican candidates for the office of the presidency is nothing but window dressing. They all share the sentiment expressed by Mr. Trump. The House passed a bill Thursday, November 19, 2015 that would block Syrian and Iraqi refugees from entering the country unless they pass strict background checks; translation: keep them out of the country
and yesterday, December 8, 2015 Ted Cruz introduced a bill to allow states to opt out of Syrian refugee plan, “In the event that the president wants to send refugees to a particular state, the governor has the ability to opt out,” . Those bills are designed to do exactly what Mr. Trump shouted on the rooftop, to ban Muslims from entering the country. So, why are we so outraged at Trump’s statement and completely ignore the Republican actions in Washington which actually does what Trump only says? There is no denying that Trump’s statement is hurtful to Muslims but it is disingenuous for the Republican Party to pile up against him.  Mr. Trump’s sin is to have publicly stated what the Republican Party has already embraced (more on that later).

After Trump made the statement that Muslims were dancing on the streets of New Jersey after the fall of the Twin Towers on September 1, 2001 – a statement that is inaccurate, rebuked and even proven false via reporting done at the time – a number of Republicans came out to condemn Mr. Trump for “spurting such nonsense”.  Despite several voices – from both the Republican and the Democrat Partys – attempt to drown Trump’s statement in a sea of rebukes, condemnations and isolation, Mr. Trump seems to have found a way to pierce through the thick barrier of opposition to his ideology. Just when it seemed the opposition was slowly and gradually winning over Trump’s proposition for a Muslim registry database, Donald dropped another explosive bomb, “ban all Muslims from entering the U.S.”

The impact seems much worse than the damage caused by the bomb dropped on Hiroshima and Nagasaki. Here in the United States, all (read ALL) news outlets, all TV networks, all government agencies including the White House have condemned Trump for dropping that devastating bomb. Arianna Huffington – co-founder and editor-in-chief of The Huffington Post – penned “A Note on Trump: We Are No Longer Entertained” where she forcefully condemned Trump for his “ban all Muslims” proposition. Tom Brokaw – journalist and author best known as the anchor and managing editor of NBC Nightly News from 1982 to 2004 – reflects on Trump’s “Dangerous Proposal” to Ban Muslims where he outlined the many dark moments in U.S. history – slavery, the Japanese internment camps – which should be used as a reminder not to give in to fear.

Although the impact of the nuclear bomb on Hiroshima was physical and had boundaries, Donald Trump’s statement reverberates across the world, the universe perhaps. Already in UK, there is a petition to “ban” Donald Trump from entering the country; enough signatures are already collected for legislators in Great Britain to consider the demand.  Also, the Arab billionaire Khalaf al-Habtoor who earlier supported Trump for believing “in bringing back his country’s superpower status” has now removed his support for the brash real estate mogul, “If he comes to my office, I will not let him in. I reject him,” said al-Habtoor.

There is not a single place to turn to here on earth, now, without hearing or reading some negative comments about Donald Trump’s raw statement. Needless  to point out that the other Republican candidates running for president have piled up once again against Trump, distancing themselves from him, hoping and praying that maybe, just maybe Christmas could come early in the form of Donald Trump falling in the polls and ultimately withdrawing from the race. Although it is within everyone’s reach to wish for the star, it is extremely disingenuous for the Republican Party in general, the Republican candidates in particular to condemn Trump. They all share Trump’s statement; Trump’s only mistake is to have said it outloud.

Don’t take my word for it. On November 13, 2015, after the attacks in Paris which left 130 dead and over 500 injured, the Republicans didn’t just come out to voice their support for the French, to extend their sympathy, to wish swift recovery to the injured and pass their condolences to the grieving families, they also had plenty to say about Muslims:

Speaker Ryan: Nov 17, 2005 – “This is a moment where it is better to be safe than to be sorry. So we think the prudent, the responsible thing is to take a pause in this particular aspect of the refugee program in order to verify that terrorists are not trying to infiltrate the refugee population.” Translation: keep Muslims from entering the United States.

Marco Rubio: Nov 20, 2015 on Fox with Megyn Kelly: “We need to close anywhere Muslims go.” Translation: have a registry database of Muslims in the United States.

Ted Cruz: Nov 16, 2015 – “What Barack Obama and Hillary Clinton are proposing is that we bring to this country tens of thousands of Syrian Muslim refugees. I have to say particularly in light of what happened in Paris, that’s nothing short of lunacy.” Translation: ban Syrian refugees from coming into the United States.

Jeb Bush: Nov 15, 2015 – “Let’s focus on helping the Christian Syrian refugees, rather than the Muslims” Translation: keep Muslims out.

Chris Christie:  Nov 16, 2015 – “No Syrian refugees, not even orphans under age 5.I do not trust this administration to effectively vet the people who are supposed to be coming in in order to protect the safety and security of the American people, so I would not permit them in” Translation: keep all Muslims out.

Mike Huckabee: Nov 20, 2015 – “Speaker Ryan needs to make it clear that if the President won’t stand to protect America from wholesale open borders, then Republicans will,”  Huckabee was suggesting that the House, currently led by the Republicans, passed bills which prevent the incoming of the Syrian refugees.

Rand Paul: Dec 6, 2015 – “Immigration visas & refugees from countries with active terror networks must be halted while we determine how to better secure our borders” sent via a tweet. Translation: Keep Muslims out.

How are any of those statements and positions different from Mr. Trump’s?

On November 16, 2015, an article by Robert Costa and Abby Phillip of the Washington Post identified two dozen Republican governors and leading presidential candidates who moved to close off their states to Syrian migrants. How is that different from Trump’s position? I fail to understand the outrage over Trump’s statement and not the action of the Republican Party. So, if someone threatens to kill, it’s bad but the act of killing is okay? I know the analogy is over the top but you get the gist, right? The Republican Party as a whole, including Donald Trump, has agreed to keep Muslims from entering the United States but no one was supposed to say it outloud, at least not the way Trump did.

While it is troubling that Donald Trump’s brash mannerism spares no one, it is doubly troubling that great many share his sentiment. One should not be surprised that a Republican president in the White House tomorrow under similar circumstance we’re in today would proceed exactly the way Republicans leaders feel today, to ban muslims from entering the U.S. and subject the Muslims in U.S. to a form of internment camps, monitoring at the very least. Farfetched? Think again. A sector of the country fought in the civil war to keep slavery; a sector of the country went along with the Japanese internment camps. One would be naïve to think Donald Trump’s statement is the problem. I am not at all bothered by the outrageous statements Donald Trump has made but I am deeply worried that his sentiment is shared by millions of Americans.