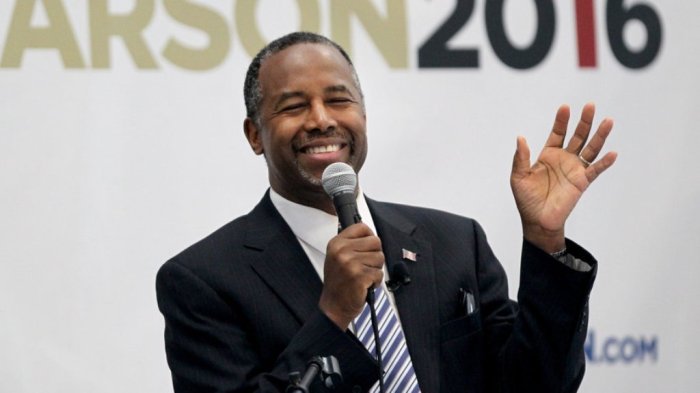 Is Ben Carson the Republican Savior?
Although I am not yet ready to declare the Republican nominee for the 2016 presidential elections (My prediction ability), it is worth taking a look at candidate Ben Carson. According to the latest polls (NBC/Wall Street journal), Ben Carson who, a few weeks ago, ranked second behind Donald Trump has now taken the lead (29% vs Trump 23%) for the nomination of the Republican Party. Without doing much but just being himself (I was told) Ben has gradually climbed to become the Republican darling. Like Trump, Ben Carson has made some rather weird comments about almost everything (Comments on Oregon Shooting, comments on Muslim president, comments on same sex, comments on planned parenthood) but that has not prevented a poll showing him beating Hillary (50/40) in the general elections. We’ll have more to say about that in a future column.

The pundits attribute his rise – as well as Trump’s – to a rare phenomenon, the constituency revolts against seasoned politicians; however, the same political experts are very quick to add that this is just a fad which will eventually subside with time, and as we’re approaching the Iowa caucus (if it can still be called that) slated for Monday, February 1 2016. Although Ben Carson has angered a few people every now and then but he has for the most part chugging along quietly, something which has served him well thus far. After two presidential debates, it is now appropriate to give you a peek at the now Republican frontrunner.

Who is Ben Carson?
There is no need to rehash the details of his life story as counted in his bid for president website; you can read about those details at your leisure. The main focus here is Ben’s success as a neurosurgeon despite the odds;  his mother, a single parent,  struggled to raise him and his two brothers. – There is no mention of his father – It is without doubt a great personal story. But who is candidate Ben Carson? Before jumping into the political bandwagon, Ben Carson was famous for performing separations of conjoined twins and developing techniques for controlling brain seizures. His successful career was the subject of a television drama series in 2009.

Although Ben had written a book of political allure (America the Beautiful…2013), it was his speech at the 2013 National Prayer Breakfast “that would get him recognized for his conservative views on social and political issues” in the Republican circle. Fearful of a Hillary run for the presidency and with no serious Republican aspirant to the Oval Office which could really challenge Mrs. Clinton in the general elections, the Republican Party turned its attention to Ben Carson for help.

Having successfully performed life-in-the-balance surgeries many times, Ben knows a thing or two about dissecting, removing tumors and repairing major organs. The Republican Party leaders perceive such skill as an asset to the party. They’re in dire need of someone to dissect the political landscape. In addition to his frequent appearances on TV programs across the nation to promote his book, Ben has also received frequent invites from Fox Opinion (known and referred to by most as Fox News) to speak about issues such as police brutality, racial inequality, abortion and same sex marriage. The folks at Fox love having Ben; he’d say the most convenient thing irrespective of the veracity of his statements. With a loose tongue, although a more refined version of Donald Trump, Ben Carson speaks his mind freely, music for the ears of the Republican media. There lies Ben Carson ascension to visibility, fame and aspiration to become the most powerful man on earth.

Can Ben Be the Republican Savior?
The verdict is still out but it seems there is a bit of indecision on the part of the constituency; they’ve been going back and forth between Ben and Donald with backup saviors Ted and Rubio. And of course, they may, can and have changed their minds before. The Republican Party has switched frontrunner more often than some of its members change underwear (Relax, I am only kidding). Is there anything different about Ben which would get the voters to stick with their choice this time? Thus far, I must admit, Ben has not danced on his head – he has rapped I heard – to warrant the attention which makes it the more likely that the Republican voters may not change their minds about him anytime soon unless of course some unexpected events happen.

The others – those who used to be frontrunners in the past – (Ted Cruz, Jeb Bush, Chris Christie) have not thus far given any indication of “scottwalking” (end bid for the presidency) the race. In fact, just recently, Jeb Bush implored his supporters to stick with him; he vowed and reassured them he will bounce back in the polls and become not just the Republican nominee but he will also take back the Oval Office for the Republican Party. It is a very difficult undertaking and a difficult (if not impossible) promise to keep; historically, candidates who have plummeted in the polls after holding the frontrunner status do not usually recover from the “political tragedy”. Jeb Bush should have listened to his mother (Barbara Bush) not to bid for the presidency; besides, historically, the United States has had a dynasty of two family members (father and son, brother and brother) who had become presidents, not three. By any calculation, Jeb would be the third Bush to become president if he were to win the nomination and be elected in office. Okay, enough of Bush! Can Ben keep it up for the long haul?

If one were to judge by his past success, the way he had defied the odds, it’s not hard to imagine that Ben will go all the way; but will he? There is a third presidential debate slated for the upcoming Tuesday (November 10, 2015) which would once again provide us all another glimpse at the candidates but most specifically the frontrunners, Ben and Donald. This time, the debate could be more substantive; the number of candidates qualified to participate in the main debate has been reduced to eight based on the latest polling. The debate will be another opportunity to “shake things up” among the candidates. Candidates who cannot offer the voters some level of details of their vision for the country should
consider exiting the race immediately.

Jeb Bush will be closely watched; if he performs better than in the previous two debates he may benefit a boost in the polls which does not necessarily translate into a candidate viability – ask Carly Fiorina who was briefly polled up to rank third behind Trump and Carson; she is now back to where she has always been – But Jeb has both money and resources to capitalize on any positive change he sorely needs. If on the other hand Jeb’s performance is poor at the debate, I would personally advise him to “scottwalker” the race before “rickperrying” (humiliating himself). Regardless Jeb’s performance on November 10, 2015, the Iowa Caucus – less than 90 days away – will simply confirm the polls’ ranking but it will also do something else, offer some candidates the opportunity to exit the race graciously. If I were to be a psychic, I would say that Jeb and a few others (the usual suspects) would have the opportunity  to “scottwalker” following the Iowa Caucus result (assuming the frontrunners hold their status) which brings me back again to Ben Carson. Can he save the Republican Party?

Regardless how things shape up after the debate or after the Iowa Caucus result, it seems almost carved in stone that Ben would be around for much longer than he anticipated when he first entered the race.  Ben’ soft tone had garnered him attention and support; as more and more Republican voters are learning about him, they are also warming up to him. He is undoubtedly a very smart individual but does he have what it takes to go the distance? Thus far, he has been spared of serious personal attacks by his rivals; except for a few jabs here and there (Trump looks guilty here), Ben has been mostly in the clear.

Donald on the other hand has been thoroughly tested; he has been criticized (although he brought it unto himself of course); he has been derided; he has been ignored (Huffington Post made the decision NOT to cover Trump under its political columns); he has been written off and yet Trump has managed, despite it all, to stay on top.

Can Carson “ride a storm” of criticisms? Although Ben is not as obnoxious as Donald, he is not any better either. But for now it seems that it doesn’t matter to his supporters. But when the candidates’ bandwagon starts whittling out, it will certainly become obvious that Ben is not all “he’s cracked up” to be. Then again Ben didn’t claim anything. It’s the Republican media and the large pocket donors which have dressed him in a hero suit, hoping he is the savior they’ve been waiting for.

Ben is an outsider alright, so is Donald Trump but Ben seems to have difficulty adapting, evolving, a must for any individual who aspires to become the president of the Republic, the most powerful nation on earth. For instance, just a few days ago as penned by Igor Bobic in an article on Huffington Post, Ben maintained his belief that the Egyptian Pyramids were built by Joseph, a biblical character, to store food in preparation for the seven years of famine which would later ravage the land, according to the interpretation of a dream – by Joseph –  king Pharaoh had (Genesis 41: 25-32). Without going into in-depth details, suffice to say that archeological studies reveal the historical purpose behind the constructions of the pyramids; hint: it has nothing whatsoever to do with storing food.  Of all the candidates, Carson is in the best position to understand how science works; research and discoveries have been at the base of man’s evolution and progress. Any common man can certainly understand that, much more so an individual bidding for the presidency. The most important job cannot possibly be trusted to a close-minded individual as Ben has displayed. It is my hope candidate Ben stops saying what’s convenient to “lure” supporters.

It is worth mentioning that as I was revising this article, news came through the wire that Ben Carson lied about a scholarship to go to West Point Academy he never applied for let alone receiving a scholarship. Although at first glance, it seems insignificant, it’s not. Ben’s appeal, at least to the republican voters, is that he comes across an honest candidate. Earlier in the day before the news hit the streets, Donald Trump challenged Carson’s account about his childhood. It remains to be seen how many other lies or inflated truths Carson has up his sleeves. Regardless, he has already lost his appeal even if his supporters are willing to give him a pass for now. He will eventually have to answer, quite possibly as early as Tuesday, November 10, 2015 during the debate, not just for the lie but for the reason. Ben Carson will now have to play defense; this may just mark a turning point in the poll ranking. It remains to be seen whether Ben can weather this storm;  there will be many more.