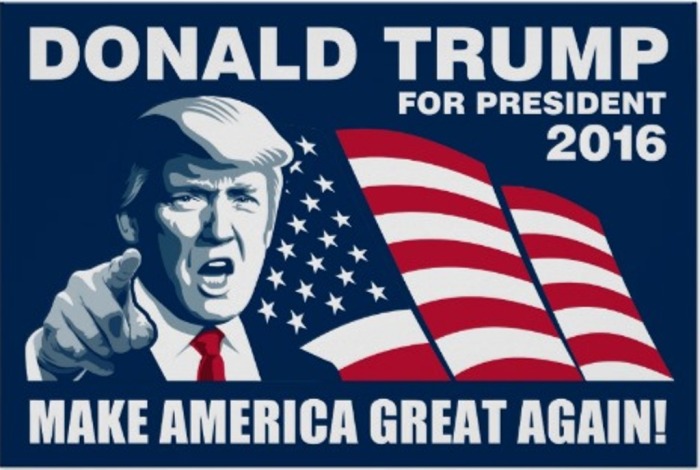 If you look beyond “the obnoxiousness” of Donald Trump, he is the best candidate to elect as the next president of the United States. Mr. Trump is just like rough diamond which needs to be refined. Rough or otherwise, nobody rejects diamond. We have had politicians for over two centuries now; there has been one common thread among them since the beginning: they are self-serving, hypocrites, liars and dishonest.

Show me a politician who is honest, speaks the truth and has the genuine interests of the majority at heart! Honest Politician, show yourself! Raise your hands! There is none, not even one. Politicians are hypocrites; they very rarely – if ever – speak the truth. They deceive at every turn. Even worst, they work every day against the very people who elected them in office. By people, I don’t mean the few who finance their campaigns. But Donald Trump is not one of them, so why has the media “ganged up” against him?

There have been backlashes unleashed at Donald Trump –not that he’s undeserving – since his infamous statement regarding the Mexicans crossing the borders to come here in the United States. Ironically, it is that very statement which has caused anguish, anger to, and condemnation by some that has propelled Mr. Trump to the top of the Republican ranking in the polls. Political experts and analysts were quick to dismiss Trump as a serious candidate. In modern time, no candidate would dare to think of something so outrageous out loud let alone express it publicly.

Remember how Romney got pummeled by the 47% statement caught on video made public! Some even suggest that’s what brought defeat to the Romney’s campaign. Nobody knows for sure whether that contributed to or was solely responsible for Mitt Romney’s defeat in 2012. Be as it may, politicians stay away from controversial statements; when there is “a slip (of the tongue)”, there is usually an army of individuals surrounding the candidates whose primary job is to do damage control; they would immediately spring to action to “spin the slip”; it’s good politics.

So, how can Donald Trump sidestep all that (politics) wisdom and still manage to keep the top of the ticket? That of course baffles seasoned politicians which may explain why most political experts and analysts perceive the Trump phenomenon as a fad which will eventually go away. Would it? Well, if Trump drops out of the race at some point, would that qualify as justification that the phenomenon was just a fad? It depends. In fact, it may have nothing to do with the phenomenon. Neither Rick Perry nor Scott Walker were phenomenon but they dropped off pretty early from the race. So Trump’s decision later to drop off the race (however early that may happen) cannot be qualified as a fad; the pundits shouldn’t use that (if it were to happen) to justify their punditry in regards to the Trump’s phenomenon.

Suffice to say that most experts and analysts completely misunderstand the elements which give rise to the Trump phenomenon. Despite predictions after predictions after predictions (of Trump’s political demise), Mr. Trump continues to climb in the polls. To no fault of his – Trump continues to be Trump, paying very little attention to the predictions – the polls reflect the sentiment of a very large group of the population. Of course, the pundits claim that Trump’s rise is a reflection of the sentiment of a specific group (not a large sector of the population), those who are disenchanted with the status quo, those who are unhappy with Washington, those who simply want nothing to do with politicians. By any calculation, this is the whole country; at least, most people in the country feel that way. And Trump continues to prove it, in Trump’s way of course; he continues to make obnoxious comments (about women and everybody else); he attacks the other candidates; he argues with reporters; just recently, he severed relations with Fox Opinion (known and referred to by most as Fox News). Despite all those cacophonies, Trump remains the top gun in the Republican side. If the Trump phenomenon was a fad, it is now a movement.

This type of sentiment is reflected not just by those who support Trump but also the voters who support Ben Carson, second behind Trump and now Carly Fiorina, third in rank according to the latest polls. Ben Carson has made some pretty damaging statements as well, the latest being his opposition to a Muslim president. And as far as Carly Fiorina, she has been staying above the fray all the while “embellishing her past experiences” which has served her well thus far. If Trump were to fall behind in the polls, both Ben and Carly seem to be the immediate beneficiaries. So, the real question pundits should try to answer is, why have the tides turned this time around?

Candidates with extreme views such as Scott Walker, Rand Paul, Ted Cruz were doing fine before Trump announced his candidacy. Today, the three outsiders (with extreme views) occupy the airwaves and secure the top ranks in the polls. The answer is not complicated at all; they speak the way they feel. The Bible says in Luke 6:45 “…for his mouth speaks from that which fills his heart.” (New American Standard Bible) Most people yearn for someone who can say out loud what they feel, what they think no matter how crude their thoughts may be. And that’s what Donald Trump offers, and that’s why he continues to do well in the polls. Irrespective of whether Trump is able to keep the momentum, the Trump phenomenon will not die.

Politicians are hypocrites; they tell you what you want to hear, not what they think, not what they have in mind. They speak with both sides of their mouths; an Arab proverb puts it best “A mouth that praises and a hand that kills.” Politicians are deceitful. In the Bible, in the book of James, the author warns us all “With the tongue we praise our Lord and Father, and with it we curse human beings, who have been made in God’s likeness. Out of the same mouth come praise and cursing. My brothers and sisters, this should not be.” (James 3:9-10). People are tired of politicians’ lies and deceptions. This time around, the constituents have a choice, an obnoxious, raw but open individual or a politician who uses the art of deception. Abraham Lincoln said “You can fool all the people some of the time, and some of the people all the time, but you cannot fool all the people all the time.”