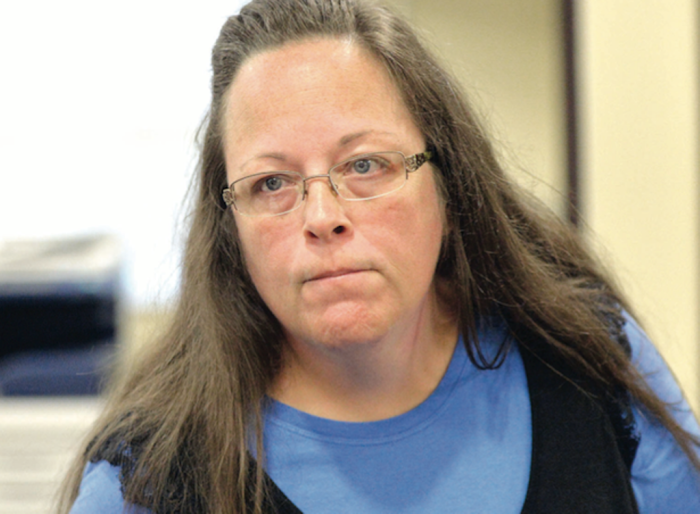 Kim considers herself a devout Christian who will uphold God’s commandments regardless the consequences. As late as earlier this morning, Monday, September 14, 2015, Mrs. Davis has continued to defy the law declaring Deputy Clerk can issue same sex marriage licenses but she will not authorize them. It is a courageous stand Kim takes to steadfastly oppose any (man-made) law which is contrarian to God’s. Indeed, it is written in the Bible in first Peter “If you suffer as a Christian, do not be ashamed, but praise God that you bear that name.” (I Peter 4:16). So, it would be okay for Kim to take such stand as a Christian. However, notwithstanding her blatant hypocrisy, her failure to fulfill her civil servant duties and her complete disregard for the word of God, Kim, like all public servants, must abide by the law. Kim’s disregard for the word of God didn’t just happen once; it happened every time (up to three times) she decided to divorce her husbands and remarry. According to the first book of Corinthians “To the married I give this command (not I, but the Lord): A wife must not separate from her husband. But if she does, she must remain unmarried or else be reconciled to her husband.” (I Cor. 7:10, 11).

Kim Davis was just a clerk of the court; simply another clerk whose job was no different than most other court clerks across the country, until of course she chose to defy the Supreme Court, the highest court in the land. And Kim becomes famous. A clerk court is an officer of the court whose primary responsibilities are to maintain the records of the court. The clerk is also responsible to administer oaths to witnesses, jurors, and grand jurors. – In small localities where there is no clerk of court, the judge is responsible for those duties – It so happens after the Supreme Court ruled same sex marriage legal, Kim Davis, county clerk from the Rowan County in Kentucky has decided to go against what’s now the law of the land, same sex marriage is legal in all fifty states in the country.

In the past, Kim’s decision not to issue marriage licenses to same sex couples would have gone unnoticed, would be business as usual for the clerk although a frustrating experience for same sex couples who sought to publicly declare and legalize their vows for one another. Today her craving for the spotlight is becoming part of the problem. According to public records, Kim Davis is a Christian at the Oneness Pentecostal church. – a doctrine which rejects the notion of Trinity (God, Jesus and Holy Spirit) but believes there is just one God –

Although it’s a clear cut argument that Kim Davis is not qualified as the steadfast steward of the word of God, I would like to offer both camps (those who support Kim and those who do not) a neutral ground to resolve the impasse. The argument should not be about whether Kim is right or wrong; the argument should not even be about Kim at all. I already established earlier that Kim only takes position which serves her purpose at hand. For instance, when it was convenient for her to divorce and remarry, she didn’t care much about the word of God.

Notwithstanding such fact, Kim is allowed to profess her faith whichever way she so chooses, as long as the exercise of her faith does not interfere with her job as a civil servant. When Kim was elected into office as Rowan County Clerk in November 2014, she felt “humbled” and “blessed.” Mrs. Davis made three promises: “I promise to each and every one that I will be the very best working clerk that I can be and will be a good steward of their tax dollars and follow the statutes of this office to the letter.” Although Kim is free as a person to take any position, however, as a civil servant, there is much at stake that goes far beyond Kim’s position.

First, regardless how one feels about the issue of gay marriage, one cannot and should not impose or force his belief unto others. Civil servants are to serve the needs of the people (all the people) according to the laws. Per our Constitution, the Supreme Court (SC) has the final say over everything legal. On June 26, 2015, in the case of OBERGEFELL ET AL. v. HODGES, the Judiciary Branch (SC) declared same sex marriage legal. From that perspective, there should not be further argument over the legality of same sex marriage. Any deviation from the SC ruling is to challenge the Supreme Court authority which translates to the following:

1) Do away with the Constitution; the Supreme Court (Judiciary Branch) is responsible to interpret and apply the laws. However imperfect it may be, all citizens (including the President of the United States) must abide by its rulings; otherwise, it would be complete anarchy; anyone who wishes to disobey the law (as Kim is now doing) could use religious ground as excuses.

2) Cherry-pick which law we’d want to obey. It’s much like a manager who would like to dictate to the owner which item to carry (or not to carry) for religious reason. How likely would the owner keep the manager around? Imagine the anarchy if every individual were to decide which law to obey based on his faith, his religion or his belief. Kim’s faith (or belief) is not any more special than the rest of us.

3) Open a can of worms, all the while trying to keep the worms in; it’s near impossible. How many times have you heard that not even the President of the United States is above the law? Would it be okay if the President sidestepped the law for religious reasons? Would it? Would it be okay if he declares to be acting on behalf of God? Are you able to foresee the implications of public servants across the country not fulfilling their duties on religious ground?

Kim’s opposition to issuing same sex marriage licenses is a cry that she needs help; no one should applaud or support her behavior (as a civil servant) all the while sharing her views. We should hold dear our Constitution; despite its flaws, it has been the compass which has guided us through dark times (slavery, civil rights, women’s rights, etc.) in our history. I do not hold judgement against Kim for her stand against same sex marriage. Mrs. Davis does not have to compromise her faith but we cannot allow her to chip away our Constitution either. She is free to resign her post and let civil servants do what they are elected to do: serve the people, all the people.