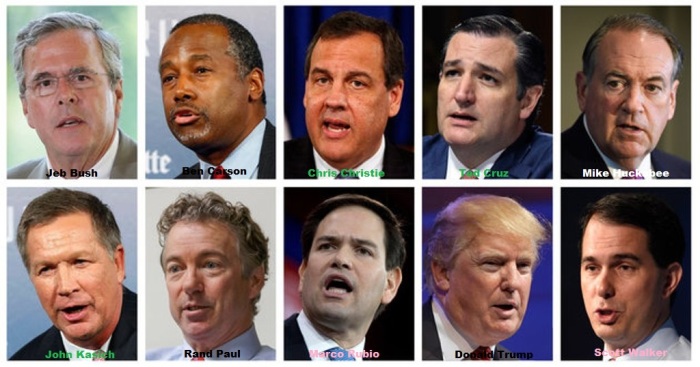 By now you must have already heard that Fox Opinion (referred to by most as Fox News) which hosts the first Republican debate in Cleveland, Ohio tonight (Thursday August 6, 2015) at 9pm EST chose the top ten poll rated candidates to debate issues of concern to Americans.

It is widely expected that the debate will be a referendum on Obama, and Hillary and the Democrats; it’s going to be talking points, sound bites, nothing substantial. The sadly anticipated aspect of the debate will be that the moderators will fuel the empty rhetoric with questions which provide even further opportunities for the candidates to go on, and on and on. While to the Republican audience, to repeal Obamacare, to criticize the current administration, to go after Hillary, to vilify the Democrat Party seems appealing, none of which offers a solution to any of the “perceived problems”.

In retrospect, that’s the reason Washington doesn’t, cannot, will not change. To make matters worse, the hosts will probably do nothing to steer the candidates away from talking points and veer them towards addressing issues and offering a solution. So, the constant “cry” for Washington to change is simply a group of people who constantly need “to vent” but desire no changes in Washington. Politicians are keen; they’ve mastered the art of “pinning” one party against the other a long time ago. It’s not because they don’t want to change; it’s not because they would not change; it’s not even because they cannot change. It’s “The People” who incentivize them NOT to change.

“The People” have empowered politicians to continue to just talk their way to any office without the need to accomplish anything. To that end, I would say that Donald Trump has an important role to play, if nothing else but to steer the conversation towards addressing and offering a solution instead of simply pandering. As crazy as the idea may sound, I believe that Donald Trump can single-handedly change the way politics work in America. Having no need for others’ money, he can speak his mind freely and address the issues without any reserve; he thus can force the others (both Democrats and Republicans) to follow his example. If only Donald could speak in knowledge of the many issues that plague the country! The only other candidate which seems more interested to offer a solution to problems than to “throw red meat” here and there is John Kasich. Most unfortunately however, the Republican constituents are more interested in talking points and sound bites than in real solutions; to that end, John Kasich does not really stand a chance to get far in the process.

As the process is unfolding, it is with great pain to once again witness another election season turning into a campaign of fights among candidates instead of a race to offer the best solution for lingering problems in the country. As much and as often you may have blamed the politicians for corruption in Washington or a “do nothing or dysfunctional Congress”, you may be responsible for the very problems you blame them. In fact, you could probably be instrumental to creating those problems; if you encourage talking points and cheer to sound bites and hungry for red meat, you are part of the problem.

I do hope you’d consider being part of the solution this time around; I know it’s a “long shot” but only “The People” can change the status quo in Washington. For a very long time we have blamed lobbyists and interest groups for the plague in Washington; although they too have some responsibility for the problems that have haunted the country for so long, “The People” is largely to be blamed. To wish for Washington to change is just that, a wish. “The People” must change its tune; it is perfect timing to do so at this early stage in the process of the presidential campaign. Let’s begin tonight with The Chosen Ten.