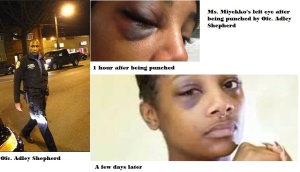 It is beyond embarrassment when news of law enforcement officers gunning down an unarmed civilian comes to the wire. It is a tragedy that should have been just an accident. And yet, it is a scenario that’s repeated over and over and over across the country. Law enforcement officers are turning into “criminals with badges” gunning down UNARMED civilians; they have a license to kill without any accountability and with impunity.

The picture on the left is that of Miyekko Durden-Bosley after being punched repeatedly by Seattle police Officer Adley Shepherd; according to the officer, Ms. Miyekko was verbally abusive – that should definitely justify Officer Shepherd’s action, don’t you think? – Here is the kicker: Ms. Miyekko was handcuffed when Officer Shepherd decided to punch her eyes out; women abuse is bad, unless of course it is done by a “licensed to kill” police officer. Ms. Miyekko suffered a fractured eye bone. Well, Officer Shepherd was justified because Ms. Miyekko was verbally abusive, and kicked him according to the officer. Give me a freaking break! While I am outrageously sarcastic suggesting that Officer Shepherd was justified, King County Prosecutor Dan Satterberg seemed to think that’s the case; he announced that his office would not bring charge against the officer. Yep! It’s perfectly okay for Police Officers to punch someone’s life out.

Since the killing of Michael Brown by Officer Darren Wilson, there’s been an increase in incidents, some of which fatal, across the nation; a 12-year old boy, Tamir Rice of Cleveland, OH, was shot dead on November 22, 2014 by a police officer within seconds of arriving at a scene where the boy was holding a toy gun – Tamir is one of 14 TEENAGERS gunned down by Police since Michael Brown tragedy; a young man was shot dead in Los Angeles by a Police Officer who mistook his pill bottle for a gun. According to a September 9, 2014 article on Huffington Post, 13 more young black men have been killed by police officers under various circumstances since the Michael Brown’s tragedy.

The trigger happy law enforcement officers should be taken off the streets, retrained, re-assigned or relieved off their duty, for anything less is unacceptable in a civilized society.

One thought on “Police Officers – Criminals With Badges Part-8”