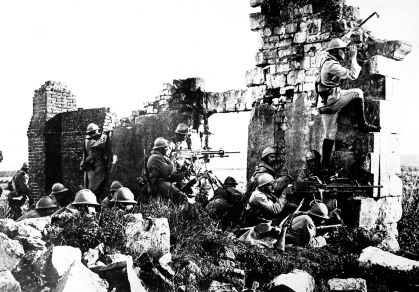 The Cold War was a state of hostility between the United States and the Union of Soviet Socialist Republics (USSR). There has never been a consensus as to its causes but several events help explain its origin. After the end of World War II, United States and USSR who fought side by side to defeat the Nazis could not come to an agreement how the post-war world should be shaped; at the heart of their disagreement were the arguments about reparations and economic policy in Germany. While US and Great Britain favored a strong and unified Germany, USSR preferred a weak and divided country. Those differing views and other world issues – economic, political, social – put US and Russia in a bitter rivalry that would last half a century.

Currently in the Ukraine crisis, there is a display of such departing views between the two rivals; the West (US, UK, France, Germany in particular) favors a unified Ukraine but Russia sees Ukraine – Crimea in particular – as a strategic part of Russia.

The disagreement over how Germany should be divided was only a symptom of a much deeper issue between USSR and US. In 1917during the Russian revolution, US Troops landed on Russian soil and got involved in the war, trying to prevent communists from taking over Russia. Russian mistrust of US is further reinforced by the history of the country being invaded from the west during that period.

Russia’s quick move into Crimea, Ukraine following the overthrow of Russia’s friendly president, Mr. Viktor Yanukovych, provides a peek into Mr. Putin’s strategy dealing with the West over those types of issues. After all, Ukraine is in Russia’s backyard; Ukraine is bordered in the East and the Northeast by Russia. Mr. Putin’s calculations took into consideration how aggressive the West, US in particular, has been to expanding the Capitalism doctrine after World War II.

The strategies and counter-strategies of both rivals, based on calculations and miscalculations fueled mostly by “spying inputs,” were at the core of what put the world at the brink of a nuclear war that would have spelled doom for mankind. As if history must repeat itself, the World is again watching how the two rivals engage in a game of political chess with unpredictable outcome. One thing is certain however, if US diplomacy stays the same – no concession, no compromise and a “do as asked” approach – the Ukraine crisis may deteriorate rapidly.

The annexation of Crimea into Russia cannot be undone regardless of negotiations and mounting sanctions. The best strategy for the West at this point is NOT to anger Mr. Putin’s administration; any hint of further US involvement into the region would only serve as an incentive for the Russian leader to continue moving further into Ukraine, a scenario that could become costly for the entire international community. George Santayana, a Spanish philosopher of the early twentieth century warned us appropriately, “Those who cannot remember the past are condemned to repeat it.”